The Battle of Windmill Point.
Source: Wikipedia
Fort Wellington became part of its second conflict in 1838, known as the Battle of the Windmill. This battle occurred when a small group of American soldiers called Patriots were convinced that the Canadians across the river in Prescott wanted to be freed from British “oppression” and essentially wanted to restart the rebellion by planning an invasion. Although no war ended up occurring, a battle took place when the Patriots attempted to cross into Prescott. The currents of the St. Lawrence caused problems, trapping their vessels on sandbars before forcing them to land east of Prescott in the new town of Newport, the site of a stone windmill. This gave troops from Fort Wellington plenty of time to prepare for what they assumed was an attack. The Americans eventually surrendered to the British troops, and were sent to Kingston for trial; eleven people, including their leader, were executed as punishment.

PRESCOTT HERITAGE
Founding of Town
Source: prescott.ca
Major Edward Jessup (1735-1816) was awarded the 1200 acres on which Prescott is located by King George III for his loyalty to the Crown during the American War of Independence. Jessup led his troops to Augusta Township, which was established in 1784, along with the other seven Royal Townships along the St. Lawrence River from Cornwall to Kingston. Jessup decided to convert a portion of his farm in Augusta into a town site in 1810 and surveyed the land in order to sell town lots. He named the town after General Robert Prescott, governor of Canada from 1796 to 1799.

Prescott was a strategic site on the St. Lawrence River for various reasons, including the fact that it stood at the head of the series of rapids between it and Montreal. All boats and ships between Montreal and York (later named Toronto) had to transfer goods and people at Prescott between smaller and larger vessels. Prescott’s first major business was the forwarding trade to facilitate these transfers. When war broke out in 1812 between America and Britain, the British decided to build a fort at Prescott to safeguard the border and maintain the flow of traffic along the St. Lawrence River. Fort Wellington was built between 1813 and 1815 to accommodate British soldiers on land that had been owned by Major Jessup.

Early Development
The town of Prescott grew quickly because of its location and the availability of land for sale to settlers who began arriving immediately after the war in 1816. The immigrants were largely from the British Isles and the United States. Britain had just successfully concluded the Napoleonic wars and there was pressure on large numbers of the population to emigrate to Canada to seek a better life. This was intensified a few decades later with the Great Irish Famine. A post office was established in 1816 and in 1823 a customs house. Alpheus Jones, descended from the Loyalists, was put in charge of both. He built what is still regarded by many as the grandest home in Prescott on Dibble Street, beside today’s town hall.

By 1834, when the town was incorporated as a Police District, the population had grown to around 1700. By that time the town boasted a large number of substantial and handsome stone residences and commercial establishments.

Trade was thriving. The town had four churches, a college, three Common schools and a female seminary. The political unrest of 1837 in Upper and Lower Canada came to Prescott in 1838 with the Battle of the Windmill. The local militia and British soldiers successfully repulsed an invading force of self-styled Patriot Hunters from the United States attempting to liberate Canada from British rule.

Early Prescott industries included iron forges, shipbuilding, tanneries, breweries and distilleries. Many smaller businesses sprang up including carriage makers, harness makers, shoe and boot makers, blacksmiths, cabinet makers, grocers and dry goods merchants. By 1850, the town had grown to about 2400, sufficient to warrant the establishment of a municipal government. In the years following Confederation in 1867, Prescott grew quickly. Railways connecting it to Ottawa and Montreal and Toronto had been built. 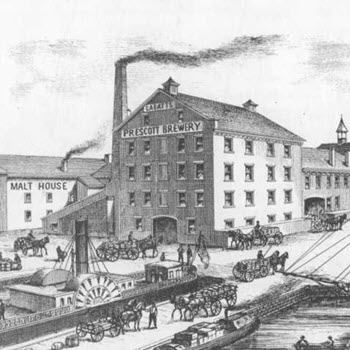 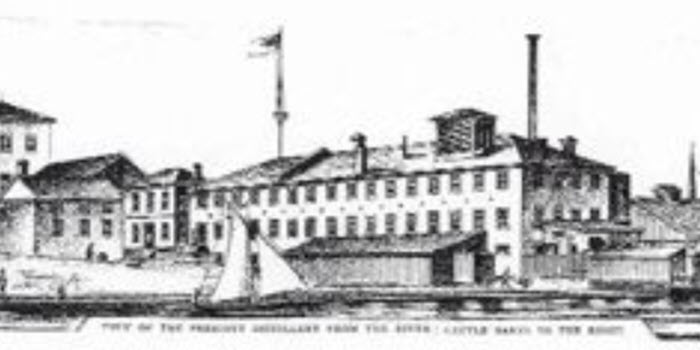 Post-Confederation Developments
The completion of the canals bypassing the rapids on the St. Lawrence in 1848 spelled the eventual demise of the forwarding trade but other industries thrived. J.P Wiser built one of Canada’s largest distilleries at the west end of the town. Nearby was the Labatt’s Brewery, an offshoot of the large London Ontario firm. With prosperity came banks, telegraph offices, newspaper publishing, a high school, doctors’ offices, dentists, a library and many features of urban centres many times Prescott’s size. Prescott was early to get telephone service, electricity, and water and sewers. Many volunteer organizations and service clubs appeared and were widely supported. Sporting clubs offered diversions in both summer and winter.

The history of Prescott mirrors the history of Canada. From a frontier settlement to a prosperous town integrated into its surroundings, Prescott today still reveals its proud past by the many historic buildings that are lovingly preserved. Take a walk in our historic downtown or along the shady residential side streets and you will be a witness to this history.